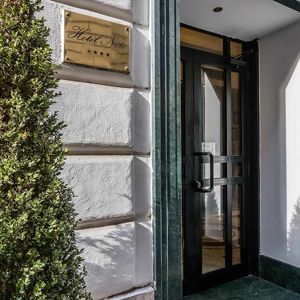 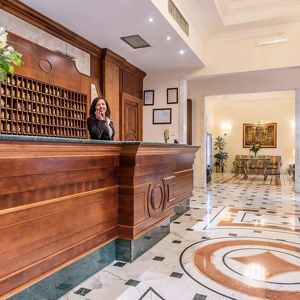 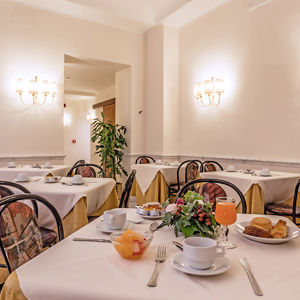 One of the advantages of staying at Hotel Noto Hotel is being close to the Trevi Fountain. The most famous fountain in the world is 1.8 km away and can be reached on foot in just over 15 minutes, by walking along Via Calatafimi towards Via Volturno, Via Volturno, Via Cernaia/Piazza delle Finanze, Via Pastrengo, Via Parigi, Via Vittorio Emanuele Orlando, Piazza di Sa Bernardo, Via Venti Settembre, Via delle Quattro Fontane, Via Rasella, Via del Traforo, Via in Arcione and Via del Lavatore.
The Trevi Fountain was built in a late Baroque style and is the most famous and also the largest fountain in Rome. Its building began in 1732 on the façade of Palazzo Poli. The work was started by Nicola Salvi and completed, thirty years later, by Giuseppe Pannini.
The Trevi Fountain is positioned in a large rectangular pool with rounded corners. The theme of the composition is the sea: the scenic design is of a rocky cliff that occupies the lower part of the building.
In the centre there is a large niche with a statue of the ocean by Pietro Bacci. On the sides of the central niche there are two other smaller niches, where the statues of Salubrity and Abundance created by Filippo della Valle are located. Above the two niches, there are bas-relief panels depicting Agrippa and the Virgin showing the soldiers where the water sources are located.
There are also numerous marble decorations depicting plant species, a snail and a lizard. The upper façade is supported by four Corinthian columns and on each of these there is a statue: Corsini's Abundance of Fruits, Bernardo Ludovisi's Fertility of Crops, Francesco Queirolo's Autumn Richness, Bartolomeo Pincellotti's Amenity of the Gardens. In the centre, between the two central statues, there is the enormous Corsini heraldic coat of arms of Pope Clement XII. The fountain is made of travertine, marble, plaster, stucco and metals.